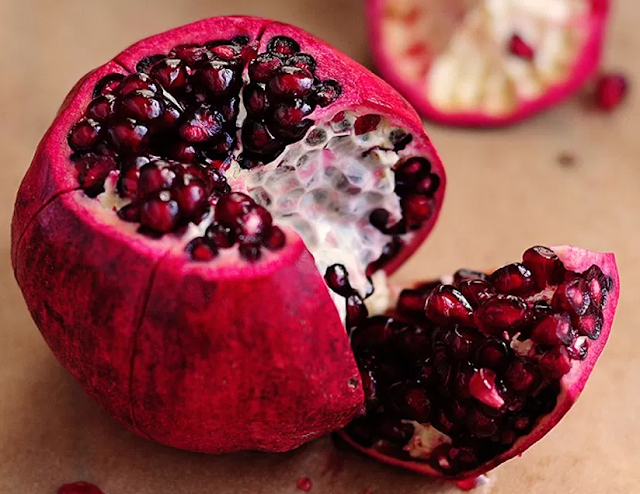 Revered since ancient times, this bright beautiful red fruit has become well known for its sweet astringent taste and healing properties. It also plays a role in myths and poetry! In fact, in one of the most popular Olympian telling of the story of Persephone, pomegranate seeds play an important role!
According to Ayurveda, amla is the best among rejuvenative herbs.

This is an excerpt of the story:

Zeus, the king of the gods, it is said, permitted Hades (god of the underworld), who was in love with the beautiful Persephone, to carry her off as her mother Demeter was not likely to allow her daughter to go down to Hades. Persephone was gathering flowers in a field when Hades came to abduct her, bursting through a cleft in the earth. Demeter, when she found her daughter had disappeared, searched for her all over the earth. In most versions she forbids the earth to produce, or she neglects the earth and in the depth of her despair she causes nothing to grow.
Finally the sun, who sees everything, told Demeter what had happened and at length she discovered the place of Persephone’s abode. In the end, Zeus pressed by the cries of the hungry people and by the other deities, forced Hades to return Persephone. Hades complies but first tricks Persephone by giving her some pomegranate seeds to eat. Persephone was released, but because she had tasted food in the underworld, she was obliged to spend a third of each year (the winter months) there, and the remaining part of the year with the gods above.
The Health Benefits Of Pomegranates

Pomegranate has inspired many comparisons of beauty in texts and other legends. Yet as beautiful and delicious as this fruit is, its healing properties are even more so! It is particularly effective on the circulatory and reproductive systems as it is a well-known aphrodisiac that has hemostatic properties.
In addition to being a tridoshic fruit, pomegranate also has fantastic antacid and carminative actions. Despite pitta being aggravated by the sour taste, pomegranate is an exception to the rule. It is also particularly useful in cases of digestive disorders with inflammation. The rind of the fruit should be avoided during pregnancy and pomegranate is not recommended in cases of constipation.
Properties
Pomegranate is light and unctuous with a sweet, astringent and sour taste. It has a heating effect in the body and its post digestive effect is also sweet. It has a strong affinity for the digestive and reproductive systems.

Some indications, amongst others, include:

It is important to be aware of some of the contraindications of using pomegranate. It is advised against usage in pregnancy and other constipation as it has binding actions.  Always seek a physician’s advice before undertaking herbal supplementation.


There are many combination compounds that involve pomegranate to address certain conditions. Some being:

A delicious and easy way to incorporate pomegranate with our daily meals is by using it in chutney. This recipe is simple yet divine!
Ingredients