Posted by creativestellars on February 16, 2017 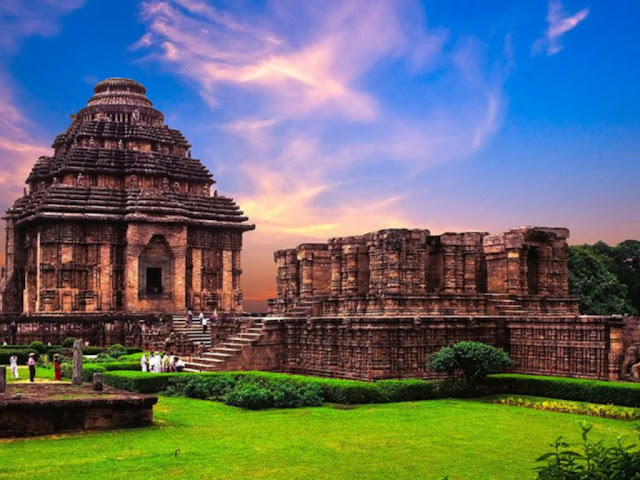 Konark Sun Temple: is a 13th-century CE Sun Temple at Konark in Orissa, India. It is believed that the temple was built by king Narasimhadeva I of Eastern Ganga Dynasty in 1255 CE. The temple complex is in the shape of a gigantic chariot, having elaborately carved stone wheels, pillars and walls. A major part of the structure is now in ruins. The temple is a UNESCO World Heritage Site and has also featured on various list of Seven Wonders of India. The temple is 35 km from Puri and 65 km from Bhubaneswar.


The name Konark derives from the combination of the Sanskrit words, Kona (corner or angle) and Ark (the sun), in reference to the temple which was dedicated to the Sun God Surya.

The monument was also called the Black Pagoda'(Kaala Pagoda) by the European sailors. In contrast, the Jagannath Temple in Puri was called the White Pagoda. Both temples served as important landmarks for the sailors. Konark Sun Temple used Iron beams for its structure. 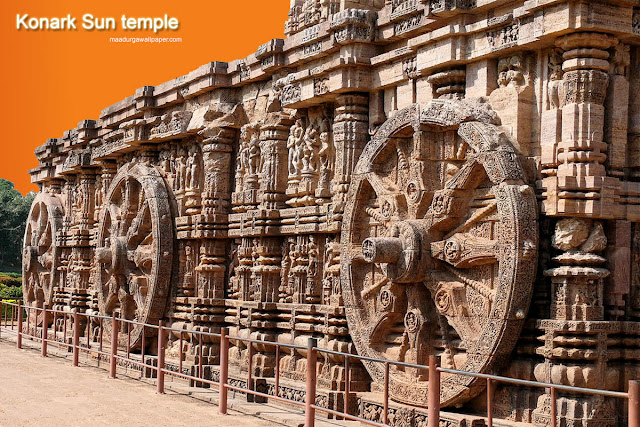 Plan of the temple (top-side is west)
The temple was originally built at the mouth of the river Chandrabhaga, but the waterline has receded since then. The temple has been built in the form of a giant ornamented chariot of the Sun god, Surya. It has twelve pairs of elaborately carved stone wheels which are 3 meters wide and is pulled by a set of seven horses (4 on the right and 3 on the left). The temple follows the traditional style of Kalinga architecture. It is carefully oriented towards the east so that the first rays of sunrise strikes the principal entrance. The temple is built from Khondalite rocks. 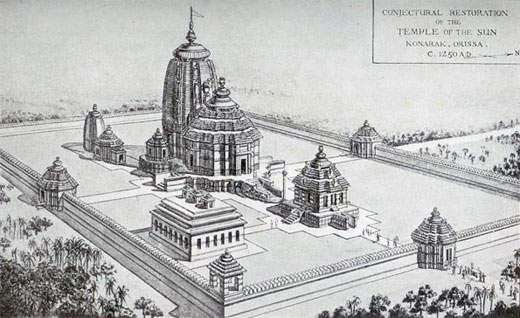 The original temple had a main sanctum sanctorum (vimana), which was supposedly 229 feet (70 m) tall. Due to the weight of the superstructure (70 m tall) and weak soil of the area, the main vimana fell in 1837. The audience hall (Jagamohana), which is about 128 feet (39 m) tall, still stands and is the principal structure in the surviving ruins. Among the structures, which have survived to the current day, are the dance hall (Nata mandira) and dining hall (Bhoga mandapa). 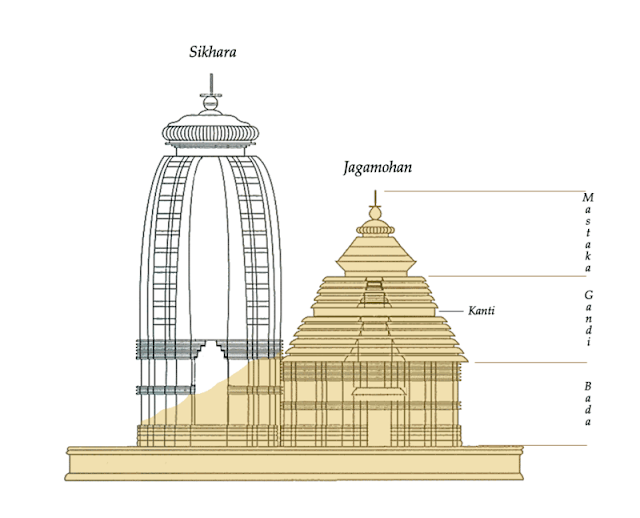 Two smaller ruined temples have been discovered nearby. One of them is called the Mayadevi Temple and is located southwest from the entrance of the main temple. It is presumed to have been dedicated to Mayadevi, one of the Sun god's wives. It has been dated to the late 11th century, earlier than the main temple. The other one belongs to some unknown Vaishnava deity. Sculptures of Balarama, Varaha and Trivikrama have been found at the site, indicating it to be a Vaishnavite temple. Both temples have their primary idols missing. 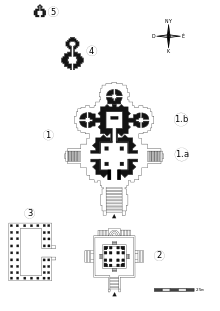 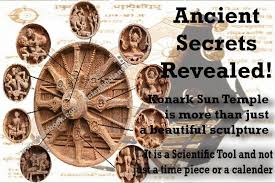 According to Bhavishya Purana and Samba Purana, there may have been a sun temple in the region earlier than current one, dating to the 9th century or earlier. The books mention three sun temples at Mundira (possibly Konark), Kalapriya (Mathura), and Multan. 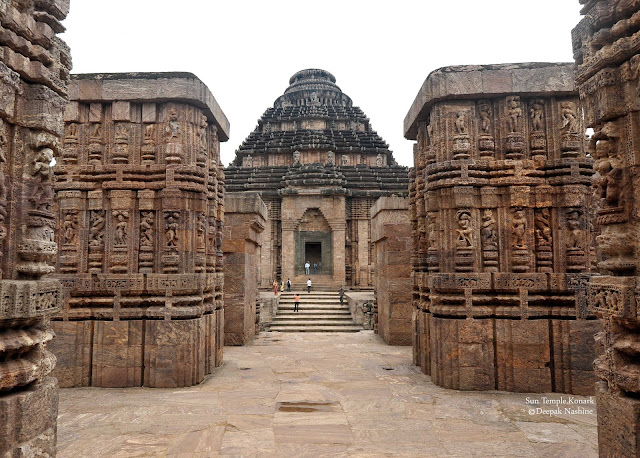 According to the scriptures, Samba, the son of Krishna, was cursed with leprosy. He was advised by the sage, Kataka,[citation needed] to worship the sun god to cure his aliment. Samba underwent penance for 12 years in Mitravana near the shores of Chandrabhaga. Both the original Konark temple and the Multan temple have been attributed to Samba.

The Periplus of the Erythraean Sea (1st Century CE) mentions a port called Kainapara, which has been identified as current day Konark. 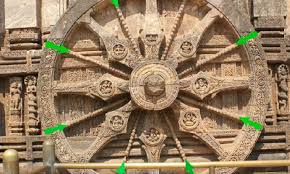 The wheels of the temple are sundials which can be used to calculate time accurately to a minute including day and night.[citation needed] 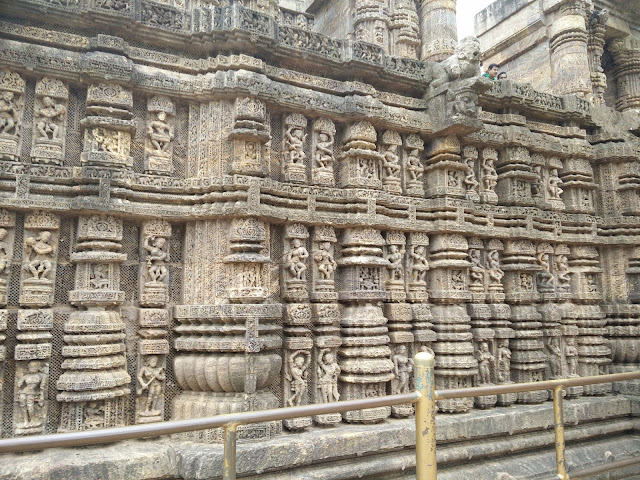 According to the Madala Panji, there was another temple in the region. It was built by one Pundara Kesari. He may have been Puranjaya, the 7th century ruler, of the Somavasmi Dynasty. 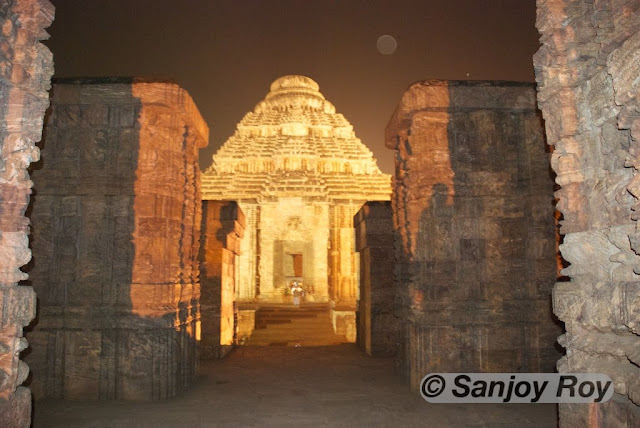 The current temple is attributed to Narasimhadeva I of the Eastern Ganga Dynasty. His reign spanned from 1238 to 1264 CE. The temple may have been a monument to his victory against Tughral Tughan Khan.


According to local folklore, Narasimhadeva I had hired a chief architect called Bisu Maharana to build the temple. After a period of twelve years, a workforce of twelve hundred almost finished the construction. But, they failed to mount the crown stone. The impatient king ordered the temple to be finished in three days or the artisans be put to death. At the time, Bisu Maharana's twelve-year-old son, Dharmapada arrived at the site. Bisu Maharana had never seen his son, as he had left his village when his wife was still pregnant. Dharmapada successfully proposed a solution to mount the crown stone. But, the artisans were still apprehensive that the king will be displeased to learn that a boy succeeded where his best artisans failed. Dharmapada climbed onto the temple and leapt into the water to save his father and his co-workers. According to local legend, – stated by a guide, the solution offered by Dharmapada was to place a strong magnetic rod in the dome at the top, which attracted the iron ore laden rocks and kept them stable. The collapse (see next)is supposedly related to this


There have been several proposed theories for the collapse of the main sanctum. The date of the collapse is so not certain.

The Kenduli copper plates of Narasimha IV (Saka 1305 or 1384 CE) states the temple to be in a perfect state.

In the 16th century Ain-i-Akbari, Abul Fazl also mentions Konark being in a proper state. The account also mentions the cost of construction being 12 years of revenue.

The cause of collapse is also placed on Kalapahad who invaded Odisha in 1568. 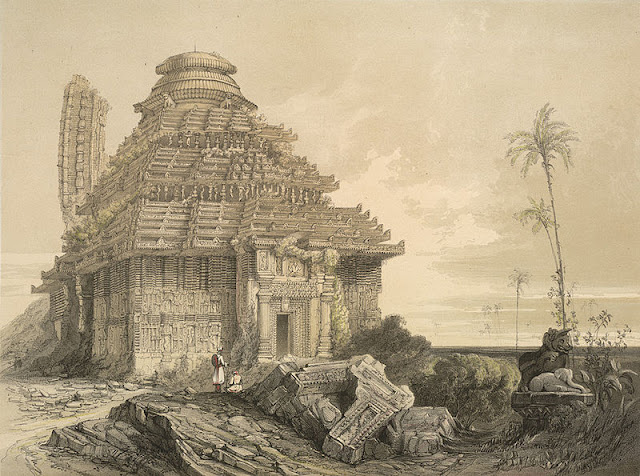 Local legend – stated by the guides is that, the collapse was caused by removal of the strong magnetized rod at the centre which was keeping the temple structure erect by Portuguese shipmen. The strong magnetic waves emanating from it were interfering with the ships' compass and resulted in a few ship wrecks! (see above)

In 1627, the then Raja of Khurda had removed the sun idol from Konark and moved it to the Jagannath temple in Puri.

James Fergusson (1808–1886) had the opinion that marshy foundation had caused the collapse. But, the structure has shown no sign of sinking into its foundation. Fergusson, who visited the temple in 1837, recorded a corner of the main sanctum still standing. It also fell down in 1848 due to a strong gale. 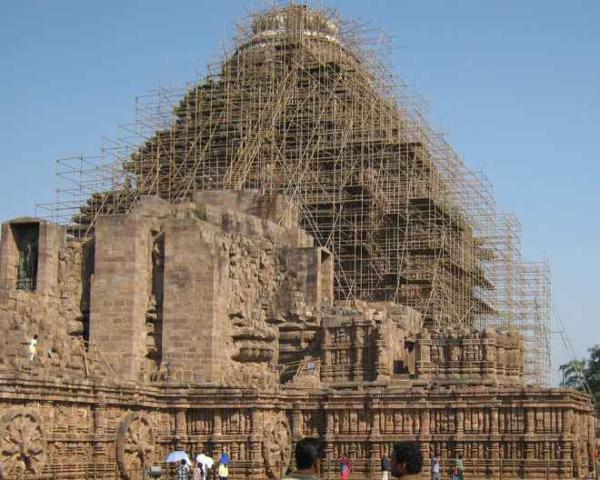 According to Percy Brown (1872–1955), the temple was not properly completed and so it collapsed. This contradicts earlier recorded accounts of the temple being in a proper state.

In 1929, an analysis of a moss covered rock estimated the date of abandonment at around 1573.

Other proposed causes include lightning and earthquake. 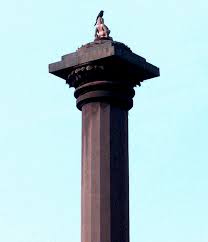 In the last quarter of the 18th century, when worship had ceased in the temple, the Aruna stambha (Aruna pillar) was removed from the entrance of Konark temple and placed at the Singha-dwara (Lion's Gate) of the Jagannath temple in Puri by a Maratha Brahmachari called Goswain (or Goswami). The pillar is made of monolithic chlorite and is 33 feet 8 inches (10.26 m) tall. It is dedicated to Aruna, the charioteer of the Sun god.


In 1803, requests were made for conservations by the East India Marine Board, but only removal of stones from the site was prohibited by the Governor General. As a result, a part of the main tower, which was still standing, collapsed in 1848.

The then Raja of Khurda removed some stones and sculptures to use in a temple he was building in Puri. A few gateways and some sculptures were destroyed in the process. In 1838, after the depredation of the Raja of Khurda, Asiatic Society of Bengal requested conservation, but the requests were denied and only preventative of human-caused damages were guaranteed. The Raja was forbidden to remove any more stones.

In 1859, Asiatic Society of Bengal proposed moving an architrave depicting the navagraha to the Indian Museum in Calcutta. The first attempt in 1867 was abandoned as the funds ran out.

In 1894, thirteen sculptures were moved to the Indian Museum.

In 1903 when a major excavation was attempted nearby, the then Lieutenant governor of Bengal, J. A. Baurdilon, ordered the temple to be sealed and filled with sand to prevent the collapse of the Jagamohana.

In 1906, casuarina and punnang trees were planted facing the sea to buffer the site against sand-laden winds.

In 1909, the Mayadevi temple was discovered while removing sand and debris.

The temple was granted World Heritage Site status by the UNESCO in 1984.